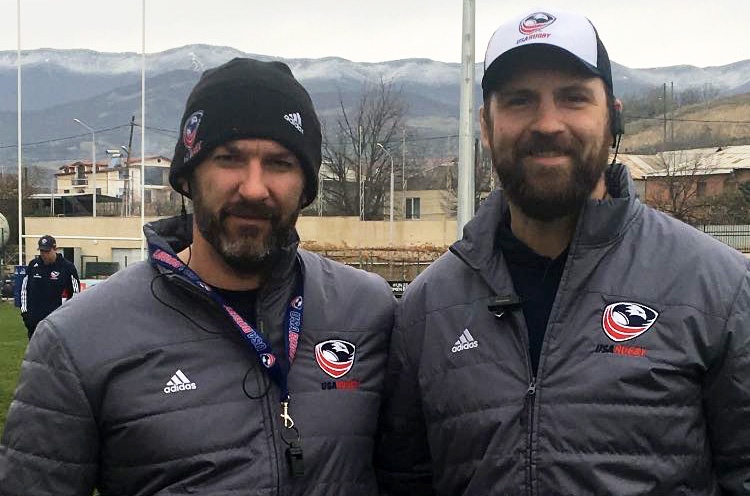 McWilliams About The Journey, Not Destination

Atavus and USA Rugby Attack Coach, Greg McWilliams, checked in with us after USA's first ever win over Germany.

Greg has been an active coach and curriculum developer for Atavus Rugby since 2016. While fulfilling his full time coaching duties at Yale University, leading from the front as their Director of Rugby, McWilliams also works with the Men's Collegiate All-Americans. With plenty of work put in, McWilliams has progressed into the senior USA men's national team coaching staff - focusing on the Eagles backs and attack structure. We reach out to Greg to learn more about his international rugby exerience, favorite coaching mantras, and what led him to want to coach.

I started playing when I was 5 years old in my school in Dublin. My two older brothers were good players so I was used as a tackling bag growing up. I loved that, great memories.

I was very lucky to coach the Irish Women's National side for a five year period, during which they competed in two Rugby World Cups (2010 & 2014). As a player I represented the Irish Colleges team and played AIL. I was an okay player, never good enough to play at the highest level.

What led you to want to coach?

I just loved it from the start. I was playing and coaching as an 18 year old and preferred coaching, so I went back to study the game and teach in the classroom to improve my understanding of the educational process. As a player, I was not quite quick enough to react to what my brain was telling me. I was very lucky to have great mentors and a position in one of the best rugby playing schools in Dublin. There is nothing better than seeing a player grow and develop. At Yale University, where I coach, the players are developing their understanding and it's so much fun.


We know you have coached the US men's age-grade programs. What do you anticipate to be the biggest difference between the senior men and the age-grade players?

There are so many variables that goes into a teams performance. Its the same game with different pressure points and a need for accuracy and execution, particularly for me, in attack.


You guys spend a lot of time on the road. What's your favorite travel hack you have developed over the years?

It's difficult to find time as there is always something to do. On flights I like to work as there are limited distractions. I would listen to a lot of music, anything really, lots of 60's and 70's. Outside of rugby, I try to playing golf as often as possible, and enjoy drawing and playing the guitar and piano (lots of room for improvement).


Every athlete has someone or something that inspires them. Who or what in your life has made the biggest impact on your athletic career?

I have had some terrific mentors in my life but nothing compares to my family. Being away from home is difficult, they have helped mold me into being comfortable being myself. Noel Turley, a former coach, teacher and personal friend changed my path and for that I am forever grateful. He has since passed. He was a wonderful educator and friend, I miss being able to pick up the phone and seek advice. His moral compass was so high, I needed that guidance.


We know you take your personal coach development seriously. How has being able to coach with Atavus and the USA Rugby Academy year-round helped with your development?

Atavus has been key to my development as a coach. Having the ability to go around the country coaching and educating is so interesting, you learn great amounts from different ways of doing the same thing. You need to be constantly up-skilling from other coaches and the players. Sometimes you need to be prescriptive and sometimes you need to guide. Getting that balance right is my personal goal as a coach.


Fun fact: what's something most people don't know about you?

I was in a band called the Howling beggars with my good friend Kenny Law, we had some great fun. My wife Sarah used to join from time to time. We never take ourselves too seriously so it is great fun.


If you could give one piece of advice to someone who is trying to coach at the next level, what would it be?

The experience of coaching is all about the player. Make it fun, ask questions and challenge their mental understanding. Personally, the basics can never been coached enough - passing, tackling, footwork and spacial awareness on both sides of the ball.


One of the tasks coaches have is to motivate your players and set the culture. What is your favorite inspirational quote or coaching mantra?

I have two that I use a great deal.
1. "Rugby is a simple game made difficult my coaches."
2. "Success is in the journey not the destination."
As a coach / player, it is so important to focus on the process and not the results. It was the theme with the Irish Women's World Cup squad in 2014 - they were an inspirational group.

You can cheer on McWilliams and the rest of the USA Men's 15s team in their match up vs Georgia on Saturday, November 25th on The Rugby Channel. The Eagles kick off in Tblisi, Georgia at 9:00 am EST.